A look at Ethereum through Google Earth

While Bitcoin has attracted most of the attention, briefly increasing the value this year, the price of Ethereum has increased by several thousand percent. The cryptocurrency was launched on July 30, 2015, and some believe that the ability of the EtherNet network to support applications can open the way to a new, decentralized Internet.

On Tuesday, Peter Sisalia, the head of the Ethereum development team, shared Google Earth images that show the distribution of Ethereum system nodes, or computers connected to the network. 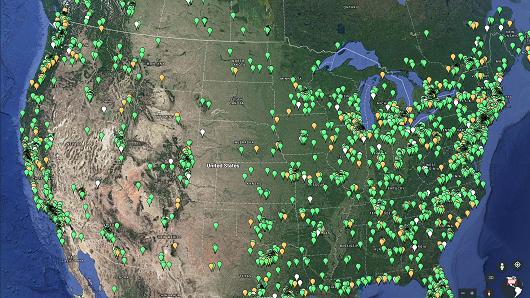 Sisalia created images by converting the Internet Protocol addresses of a computer from Ethernodes.org to geographic locations on Google Earth. He added that the Ethernodes project may not track all nodes, but the data is “the best we have at the moment”.

“Central Europe seems a little richer than, for example, the US (without looking at the actual numbers). This is because the Ethereum development team is mainly based in Europe.”

In mid-June, crypto enthusiasts pondered “flipping,” a term used to describe the time when Ethereum's market capitalization would outperform Bitcoin. Digital currencies came close to this event on June 13, when ETH's capitalization was approximately 33% of market value and BTC was about 40%.

However, Sisalia said comparing the Ethereum and Bitcoin nodes is like “apples versus oranges”.